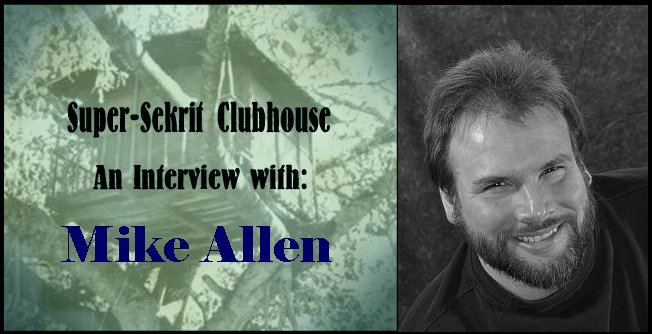 Some of you might remember that I interviewed Mike Allen here back in 2009. It pleases me to do this follow-up interview, this time focusing on Clockwork Phoenix 4 and his Kickstarter campaign to fund the project.

In addition to being the editor and new publisher of the highly acclaimed Clockwork Phoenix anthologies, Mike is also a writer and a poet. The Philadelphia Inquirer has described him as one of the better-known practitioners of speculative poetry. He's also the publisher and editor of the poetry journal Mythic Delirium. In 2008, his story “The Button Bin” was a finalist for the Nebula Award. He currently lives in Roanoke, Virginia where he’s an arts columnist for The Roanoke Times.

Could you tell us how you came to be the new publisher for the Clockwork Phoenix series?

I'm going to assume you're asking me how I became the publisher as well as the editor of three previous volumes in the Clockwork Phoenix series—I can't call myself publisher of the fourth book unless the Kickstarter campaign succeeds (see below.)

The full answer to this question is a bit sensitive and yet involves enough inside baseball to make your eyes cross, so I'll try to be succinct. The original publisher of the series fell on hard times and stopped paying royalties on the books, though they continued to sell at least a little bit. My publisher also never pursued creating e-book versions of the series. (Mind you, my publisher paid all the writers their advances and was always great to work with. I mean no disrespect in any way, shape or form.)

In late 2011 my wife and I both found ourselves worried for our financial security. Wracking my brain for what I could do to possibly make extra money, I decided to finally try my own hand at self-publishing e-books—at that time, not long before the Kindle Fire was expected to appear underneath Christmas trees all across the country, the fervor for indie publishing (hee!) had reached fever pitch. The first volume of Clockwork Phoenix remains my best selling book (not remotely the same as a bestseller, mind you) and converting it to e-book format seemed like a Captain Obvious directive. I worked out how to split the royalties with the contributors, got the original publisher's blessing and made it happen. I've since released e-Clockwork Phoenix 2 and the third one is nearly ready. So that was step one.

Step two occurred because another company expressed interest in becoming the publisher of the first three books in paperback. I discussed it with my original publisher, and we wound up agreeing that the best thing to do was for me to set up my own print-on-demand account and have the books transferred to me. So that happened, and suddenly I'm publisher as well as editor for all existing editions of the Clockwork Phoenix trilogy to date.

And I've always felt that the series has more to offer. So then came step three... 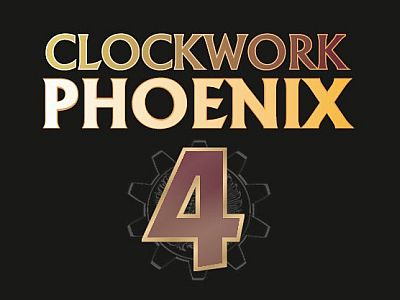 You’ve set up a Kickstarter project for CP4. What can you tell us about that?

Anthologies are expensive and short stories don't bring people running to the bookstore. I certainly on my own could not afford to foot the bill for one, much less take the financial risk of putting it out there to sell, without help. And yet I've talked to writers and readers who are hoping for a fourth volume. I want to make a fourth volume. I've had in mind for a while the idea of trying a Kickstarter...basically putting the questions out there: do you really want this? Will you help me make it happen?

So now I've taken the leap. What I can say as of this writing is that the results are really promising, but I'd be a fool to celebrate just yet. I'm ecstatic that the campaign is so much further than I thought it would be after one week in (we're just past $3,200 after eight days as I write this) and yet it's not fully funded, so there's still a real possibility of concluding this with $0, and thus no book. I can tell you this—a Kickstarter consumes your brain: the excitement, the worry, the constant checking for updates. If you want to try this yourself, be ready.

Now that you’re publisher of the series, will you be doing anything different editorially? If so, what?

In many ways it's too early to say—there's so much I don't know. In a perfect world this campaign shoots past $8,000 and I can pay ye old professional rate of 5 cents a word. If I can manage that, I don't know how it might change the stories I'd have to work with—if I get the funding to work with any stories. That question has to be answered ahead of anything else.

However, I can say that, if the book ends up a go, Anita and I will certainly shoot for the same mix of offbeat and beautiful and eerie works we did before, and arrange the stories to create a thematic narrative, just as with the previous volumes. We'll absolutely have an open call for submissions, just like before. I will probably dispense, however, with my weird prose poem introductions. I had fun doing those, I think they at least served the purpose of showing the reader how to watch for interconnecting themes, but I feel like I took that idea as far as it can go. It's time to shut off the wizard's glowing holographic head and step out from behind the curtain.

The Clockwork Phoenix anthologies have garnered much praise. What is it about them that excites you the most, gives you the most satisfaction?

I'm really happy with those three books from any number of angles. I'm proud that people recognized that we were up to something different there with our “interesting tales told in interesting ways” motif, and that all the stories got some kind of recognition for what our authors tried to do, whether it was an award nomination, a reprint in a “Best of” anthology or even just a nice nod from a reviewer. One of the best parts of reformatting the anthologies as e-books is that it's required me to go back and read them all. I love every story, and I love how they flow from one to the next. (The second volume has a childhood-to-old-age progression, while the third volume, for what it's worth, forms a circle, ending with the same words it begins with.) I love that we gave some new writers exposure they might never have had. I love that we got a lot of contributions from writers who had just reached or were about to reach new levels in their careers. I love that these books are packed full of surprises. 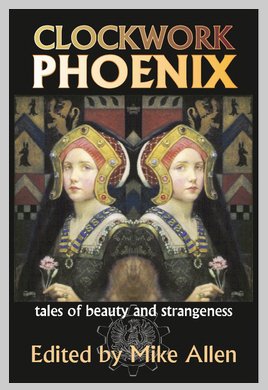 Switching to Mike Allen the fiction writer and poet, how does your approach differ between the two forms? Are you able to easily switch between the two or are you forced to write poetry and fiction at different times?

Though of course they're interrelated, I think my fiction comes from a very different place than my poetry, like the former is a left-brain process and the latter is a right-brain thing. It's not that I can't work on both at the same time, but they don't come together the same way. Poetry can involve a sort of travel by instinct, like abstract painting, even when the subject matter requires research, while fiction for me takes planning and mapping, or retroengineering after the full draft emerges. An example I can give to perhaps illustrate is my science fiction piece “Twa Sisters” in Not One of Us that resulted from artwork shown me by Patty Templeton and a challenge from Nicole Kornher-Stace to write a story the way I would a poem. Visual tricks with the text wound up being about the only thing it had in common with my poems. I wound up going crazy with surprise plot reveals rather than language, which I think is what Nicole was hoping for. At least Rich Horton said nice things about it in Locus!

Who are a few of your literary influences? Can you name a writer or three you’ve studied for craft? Who do you read for pleasure, or are the two the same?

Seems to me that these days I'm almost always reading works by people I know. I'm not sure I ever dreamed I'd reach a point in my life where just about everyone I know is an author. Most recently I read Chesya Burke's Let's Play White, a literary, very brutal, socially conscious horror collection, which I reviewed in the monthly “Tour of the Abattoir” column I record for Larry Santoro's Tales to Terrify podcast. If you're up for a challenge, try Nicole Kornher-Stace's Desideria. It's not an easy read, but it will bend your mind and she's an amazing sentence crafter. On my list there's Rose Lemberg's The Moment of Change anthology of feminist speculative poetry and horror writer Laird Barron's first novel, The Croning. My guilty pleasure though—not that it makes me feel that guilty—is hands-down Jim Butcher's Harry Dresden series.

Influences? Well, from childhood, all the usual, Poe, Tolkien, Lovecraft, Ellison, Asimov, MacCaffrey, Le Guin, Zelazny. Tiptree shows up when I'm a teen, as does William Gibson, then later on Barker and Straub. King too. There's many, many more. Perhaps my watershed moment in regards to craft came from finally figuring out how to commit the idea to paper for what became my Nebula Award-nominated short story “The Button Bin” after reading Cormac McCarthy and Joe Hill back to back, though I'm not sure I could tell you why that particular combination did the trick.

Besides CP4, what other projects are you working on or have planned for down the road?

Well, the biggest news besides CP4 would be The Button Bin and Other Horrors, my first collection of short stories, that's coming out later this year from Apex Books. It gathers a number of my horror stories in one place, and it will include the debut of the nastiest piece I've ever written, a novella called “The Quiltmaker” that's a sequel to the collection's title story. Laird Barron has written an introduction to the book that just floors me. I feel like I'm so well known for poetry that people sometimes forget that I'm a fiction writer too, Nebula Award finalist or no. Maybe this book will finally fix that. We'll see.

There's another project I've been working on, fiction-wise, that I think is at least as big a deal, but as the i's are not crossed and the t's are not dotted, I'm afraid there's nothing more I can do than drop hints that it's considerably longer than a novella, involves music, magical fire, and the undead, and that it has the highest on-stage corpse-count of anything I've ever written.

And in all this hubbub, it's easy to lose track of my poetry journal, Mythic Delirium. The contents for Issue 27 are all set, with new poems from Ken Liu, Theodora Goss, Rachel Swirsky, Rose Lemberg, Sonya Taaffe, Shira Lipkin, Alex Dally MacFarlane and quite a few others. I hope to have that out in September, we shall see.
Collapse