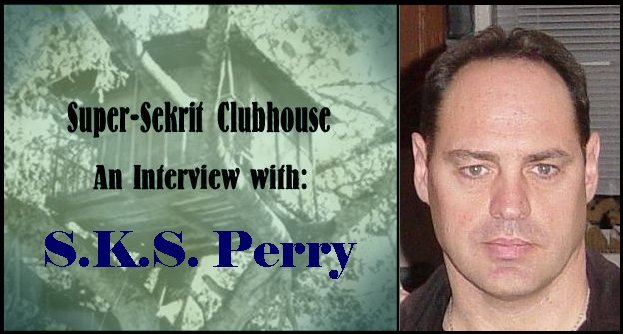 S. K. S. Perry is the author of two urban fantasy novels Darkside and Darkside: Waking the Dead. A sergeant in the Canadian Armed Forces, Steve’s writing has a true human warmth and singular wit. Both novels are available at Amazon.com and Smashwords. His short fiction has appeared at Strange Horizons and Ideomancer. He blogs on LiveJournal at

Could you tell us a bit about yourself before we discuss your writing?

I’m just now rounding out 30 years of military service in the Canadian Forces. The stuff you’d like me to tell you about I can’t, and the stuff I can tell you about would bore you. I’ve got black belts in seven different martial arts, and I’m a pretty darn good drummer. My real name is Steve Perry, but there’s already some hoity toity SF writer who goes by that moniker, not to mention the singer for Journey, and some big Hollywood producer. Apparently I’m the only one with the name who hasn’t made anything of himself—yet. S.K.S. are my actual initials, and coincidently the name of a Russian carbine, so that makes me cool by default. I’m married to a wonderful woman who fully supports my writing and knows I’ll make it big someday. My Dad always said a man can do anything as long as he has a good, delusional woman to stand behind him, and help pay the bills.

Your path to becoming an indie writer came after pursuing the traditional route. Please tell us about that.

Nobody loved me. Well, that’s not true, a lot of people loved me, just not the right people—the ones who thought they could make money off my writing.

I’m lucky enough to have a lot of successful friends in the industry. Some were already famous when I met them, others started off in the trenches with me and went on to become successful, leaving me behind in the dirt. But I’m not bitter.

Anyway, a lot of these friends pushed my first novel, Darkside, in front of every agent they knew. That’s half the battle, by the way—actually getting an agent to read your manuscript. In a way, because of my friends, I managed to sort of/kind of skip the line, so to speak. Unfortunately the general consensus was, “We really like this, but there’s no market for humorous fantasy right now.” Maybe it was just a matter of timing, and if I had written the book now, in today’s market, it would have had a better chance. Maybe not.

But without an agent that meant submitting my book to the publishers’ slush pile, and there’s not a lot of publishers that allow that any more. I’m pretty sure those unsolicited manuscripts are filed right alongside the envelopes with suspicious powder in them. And did you know agents can submit your manuscript to multiple publishers at once, but if you’re submitting it on your own you can only submit to it to one publisher at a time? Seriously, it’s one of the Stupid Rules.

Baen held onto Darkside for over a year. At least the rejection, when it came, was personalized. The editor hated it. But, attached to the rejection letter was a note from what I can only assume was a few of the junior editors, basically saying, “Don’t listen to him! A lot of us loved this and that’s why we held onto it for so long.” They probably all work at McDonald’s now.

Anyway after a couple of years of this sort of thing, I happened to get a rejection letter on the day that just happen to coincide with International Pixel-stained Technopeasant Wretch Day. In a fit of pique (I always wanted to say that) I decided to post it, figuring at least someone would read it. I actually offered Darkside up for free for a few years, until friends convinced me to try selling it on Amazon.com. Hey, it worked for Amanda Hocking. 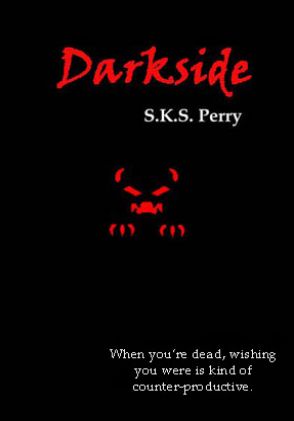 What can you tell us about your experiences with Amazon.com and Smashwords?

In a nutshell, when I finally decided to offer up Darkside as a Kindle ebook, it turned out Amazon already had one. It was even written by me. There it was, Darkside by S.K.S. Perry. Someone had represented themselves as me and published my book under my name, but to their account. It took me over 2 weeks to sort out, even after sending Amazon a DMCA take down notice. Amazon never revealed the perp’s name (that’s cop talk, eh?) nor reimbursed me for any money they may have collected, and to my knowledge no legal action was taken against the thief. Other than that they’ve been quite good, and send me a check every month or so. I tend to be forgiving of people who send me money.

What happened between me and Amazon.com actually got a lot of press. Initially Jim Macdonald related the story over at Making Light, and John Scalzi picked it up on his blog. From there it kind of went viral, to where the Guardian.uk featured it, and then all of its subsidiaries and so on. It actually would have been great publicity if not for the fact that only other writers read that stuff. Readers? Not so much.


And Smashwords? Well, even though it’s at least eleventy-four times easier to format your books for Smashwords, and they sell across a lot more platforms (Apple, Sony, Nook…even Kindle) I sell about 100 times more books at Amazon. And for some reason Smashwords acknowledges that they owe me money, they just won’t send it to me until I fill out some convoluted American tax forms. (I’m Canadian, eh?) Amazon doesn’t do that. Smashwords does, however, make it easier for you to offer specials and discounts on your books sold through them. Kindle only allows that if your books are sold exclusively at Amazon.com.

For new writers considering publishing their work in ebook form, do you have any advice? Pitfalls to avoid?

Seriously though, make your book as professional looking as possible. Commission cover art, hire yourself a good editor, or maybe more importantly a good copy editor. If it looks like a real book, readers just might think it’s a real book. And if you figure out a way to market it so that it stands out above the other thousand eBooks being offered up every day, let me know, will you? The only thing that seems to really affect your sales volume at the moment is volume—the more books you have for sale, the easier they are to find and the more you sell. That, and having Justin Bieber or Lady Gaga tweet about you. Neither one of them are returning my calls. 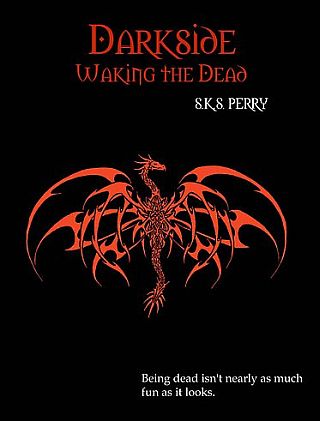 Both Darkside novels are a hellava lot of fun. How did these two novels come about?

I’m what we call an intrinsic writer, which is basically pretentious snob-speak for “makes it up as you go along.” When I started Darkside all I had was the opening paragraph, and the voice. Don’t ask me where the rest of it came from. Some of the characters are based on my friends. Charlie, the ogre is based on C.C. Finlay, although I don’t know if he knows that, so don’t tell him. The cop, Greg, in the second book is based on my childhood friend. The dog, Bear, was my pet when I was younger, and all the angsty stuff is me working out my issues. And Decker? Well he’s mostly me. He has my sense of humor. He’s just living a more interesting life. That, and I’m not dead.

I wrote Waking the Dead because I still had more to say about these characters. I still do. Plus I wanted to test the main protag’s limits more. I wanted to make things more difficult for him. Also, I’d read a lot about Celtic myths and heroes over the years and thought it might be fun to inflict share that knowledge with my readers. And lastly, the prevailing wisdom at the time was that it was easier to sell a book as a series, rather than a standalone. Of course, if you can’t sell the first book writing the second book becomes a rather colossal waste of time. Luckily Amazon, and Smashwords came along and provided a market for my work. Believe it or not, the series has a lot of fans from all over the world.

Your latest novel is The Moonlight War. Tell us your plans for this book. How is it different than the Darkside series?

The Moonlight War is quite different from the Darkside series in that it’s a straight up heroic fantasy, hopefully along the lines of something David Gemmell might have written. There’s humor in it, but it’s not a humorous book per se, like the Darkside series. I guess you could say it’s a more serious book, more epic, although I wouldn’t call it an epic fantasy (because I hear those are hard to sell right now.) It has a large cast of characters, and hopefully the plot is one that unravels slowly, like a mystery. Of course I’ve added my own little quirks to the trope to make it my own. It’s also the first book in a proposed series, but works as a standalone.

I’m trying the traditional publishing route with this first, because marketing is our friend, and because even though I’ve had modest success as an indie author, there’s still a bit of a stigmatism when it comes to self-publishing. You’re kind of like that officer who’s never been to West Point. If, however, I don’t have any luck going the traditional route, I have no qualms about self-publishing it.

What was the craziest/funniest rejection letter you ever received?

I used to have this running gag with my friends that agents/publishers would save a lot of time if they’d just reply, “Steve, no.” One of them must have seen that on my blog, because they actually did just that. (I also developed a SASRL-self-addressed stamped rejection letter—because I was sure I could say nicer things about my work while turning it down than they could.)

Although the funniest rejection to me personally was the agent who told me they found my fight scenes unrealistic, and that maybe I should talk to someone who’s actually been in a fight before I tried to write about one. Given my background as a combat vet, unarmed combat instructor, bodyguard, and martial artist, I thought that was amusing. Although I suppose if your only experience with fighting was getting a severe wedgie and being shoved in your locker during high school, my stuff might seem far-fetched.

What are your plans for the future? What’s ahead for you and where would you like to see your writing life to be in five years?

My military career is pretty much at its end. Ideally, I’d like to be able to supplement my pension with my writing, so that I don’t actually have to work for a living. (Trust me, you can’t live on a military pension.) That and play in a little pickup band on the weekends.

And to be honest, I’d like to be able to make my living as an independent author. You have more control over your work, your career, and what you write. Of course if some publisher smacked me upside the head with a six figure deal I wouldn’t say no. (Read above re: independently wealthy.)

I’m currently working on book three of the Darkside series, plan on writing the sequels to The Moonlight War, and I have a space opera that needs renovating that I’d like to publish and write sequels to. If everything works out, I should have three series on the go by next year.
Collapse