In fiction, characters laugh, giggle, chuckle, guffaw, cackle, snigger, chortle, and titter. They also snort. Snort? Yes, I know what a snort is. From Merriam-Webster:

: to force air violently through the nose with a rough harsh sound.

Over the last few months of reading, I’ve come across character after character snorting. Sometimes several characters in the first 100 pages of a novel snort. Moms snort, dads snort, children snort, mayors of major metropolitan cities snort, as well as the homeless, the impoverished, the down-and-out. People who don’t have anything to snort about snort!

Even in short fiction, character after character snort. Lately, in what I’ve been reading, fictional characters snort a lot!

My problem is that I can't remember the last time I saw or heard someone IRL snort. I can’t even ever remember snorting myself. (It’s gotta hurt, right?)

Snorting is an involuntary action. Can anyone reading this make themselves snort on command? If you can, put it up on You Tube. I wanna see it! And I’m not talking about white powder off a mirror.

Now, every time I see a character snort in fiction, I only see the writer introducing a minor stage direction to show a character in some unbelievable action. I see authorial intrusion! The occasional snort used to be fine. But if all your characters snort… See my point?

So, could we please have a five-year moratorium on snorting in fiction? I think we've reached our snorting quota until 2017. 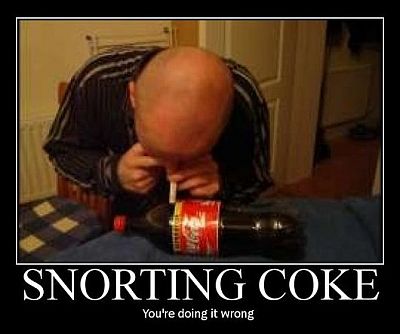