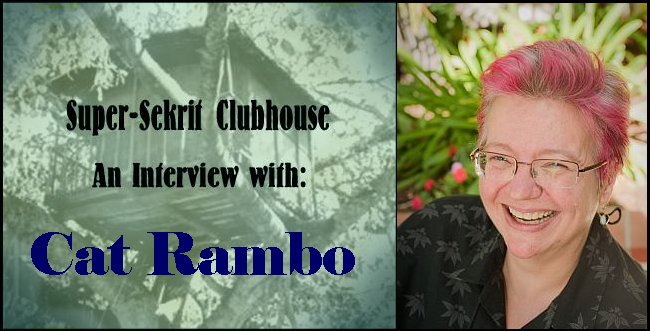 Cat Rambo’s short fiction has appeared in many quality markets: Asimov’s, Clarkesworld, Strange Horizons, Weird Tales, to name just a few. She was co-editor of Fantasy Magazine from 2007-2011, which earned her a 2012 World Fantasy Special Award: Non-Professional nomination. Her first collection, Eyes Like Sky and Coal and Moonlight, was published by Paper Golem in 2009. Her most recent collection, Near + Far, has just been released by Hydra House. Learn more about Cat at her website/blog The World Remains Mysterious.


Your latest collection is published by Hydra House. What can you tell us about them and how the collection came about?

I had been thinking about doing a self-published SF collection in an e-version only, but when I talked to Tod McCoy, who is Hydra House’s owner and also part of the writing group I belong to (Horrific Miscue Seattle), he proposed handling a print version. Over the course of time, it became clear he should be handling the electronic version as well. Working with Hydra House has been an absolute joy, and I’m hoping to work with Tod on more projects in the future. I cannot begin to say how beautifully the book has turned out under Tod’s expert guidance and how proud I am of it. 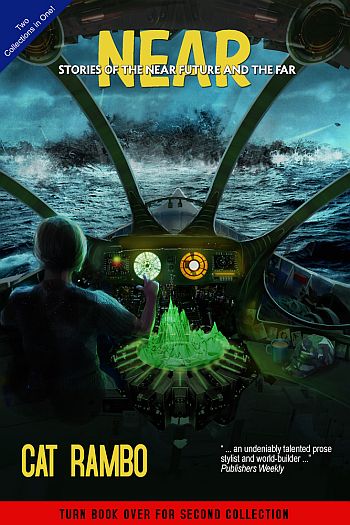 Near + Far is formatted like an Ace Double, one side features all near-future stories; flip it over for the far-future stories. Whose idea was that and when looking over the stories you wanted to publish did the Near/Far idea strike you immediately?

The double format was my idea, which came to me when I was looking over the list of stories and seeing that they were equally divided between near future and far future. I told Tod I had a wild idea, proposed it to him, and he ran with it. I loved the old Ace Doubles, and one of the fun things Tod did with the cover was manage to reference the look of them through his choice of font and color.

I think books need to take into account the rise of electronic publishing, and physical books must become something more than just a way to deliver text. Between the interior and exterior art, the gorgeous layout, and the cool form, Near + Far is a piece of art itself.

How is this collection different from Eyes Like Sky and Coal and Moonlight?

ELSCAM is pure fantasy, full of zombies, manticores, and wind elementals. I wanted to show that I wrote science fiction as well, and I was pleased that when I sat down to look, I had more than enough stories to fill such a collection. In fact, we ended up cutting a lot from the list to keep the book from being twice as long.

The first story in the near-future section is “The Mermaids Singing, Each to Each,” which shows your skill at not only worldbuilding but characterization, as well. What aspects do you find most satisfying about this piece?

I love that story because to me it’s an example of what can happen with a fortunate collision of ideas. I wanted to write a tribute to Hemingway’s The Old Man and the Sea, and I’d also had an idea about carnivorous mermaids, since I’d been seeing a slew of non-carnivorous ones in the slush at Fantasy Magazine. A friend, Katherine Sparrow, posted a link to an article about floating masses of garbage currently existing in our oceans, and that was the thing that made everything click for me. It originally appeared in Clarkesworld Magazine, which I’m always happy to be published in, because they are putting out, in my opinion, some of the best speculative fiction around. 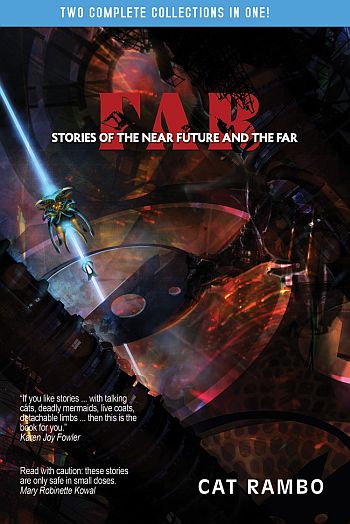 Your story “Amid the Words of War” is depicted on the Far cover of this collection. It was also selected for the Prime Books anthology War and Space. What can you tell us about this story and where did the inspiration for it come from?

“Amid the Words of War” was inspired by something Octavia Butler said to my Clarion West class about her own Lilith’s Brood. I wanted to talk about a prisoner of war who returns to find itself suspect because of its imprisonment. I also was working on a series of stories set on TwiceFar Station, the setting for most of the story, and so I had Six take up employment in one of TwiceFar’s odder establishments, a brothel called The Little Teacup of the Soul.

What do you consider some of the principal advantages and disadvantages when writing a far-future story as compared to a near-future one?

I think it’s in many ways harder to predict the changes to society in the far future. We carry so many cultural assumptions that end up affecting what we take for granted will appear. A few years ago, I read an Asimov story which went along fine until I realized he was presuming that the gender roles of his time would not change, leading to an odd Leave It To Beaver type of establishment on the Moon. I don’t think he actually went so far as to posit white picket fences around the houses the wives were all baking apple pies in, but it was close and it was pretty clear he never thought that women might want to pilot the spaceships themselves once in a while.

Advantages? Well, you can get wild and wacky and presume all sorts of changes. Near future, you need to be more aware of what the existing technology is like.


What else are you working on? What's next for you?

I’m currently reworking the first volume in a fantasy trilogy that takes place in a location I’ve set a lot of stories, the seaport of Tabat, and hoping to have that ready for prime time by the end of September. After that, I’m waiting to see, but I’ll still be spinning stories. I just finished a novella set in the world of the Fathomless Abyss, a shared world overseen by Phillip Athans, and I’ve got the sequel to that half written and slated to be finished soon.
Collapse